JoJo Siwa was born in Omaha, Nebraska on May 19, 2003. Jojo Siwa started to dance at two years old in her mother’s dance studio. Her father is a chiropractor. She first became widely known after starring on seasons 5 and 6 of the Lifetime reality television series Dance Moms. Before that, Siwa was first featured on the reality TV series Abby’s Ultimate Dance Competition in 2013. She is part of the ALDC elite dance team. Her music video for her song “Boomerang” has more than 500 million views on YouTube and her video for “Kid In A Candy Store” has 100 million. In total, she has around 9 million subscribers and 2 billion video views on YouTube where she posts a daily video blog.  Siwa is known for wearing large, colorful bows in her hair. Today she has a line of bows that are sold at Claire’s. In 2018, JoJo signed a deal to bring a line of accessories, including bedroom decor, to the department store J.C. Penney.

JoJo Siwa Bow Tie Sales: We hear from many of JoJo’s fans that her net worth must be significantly higher since she has reportedly sold 40 million bow ribbons. Though this number has not been independently verified or reported in a business journal of some kind, even it it were true it doesn’t mean JoJo herself is making “hundreds of millions” of dollars off the sales. Typically in the case of a celebrity product line, the celebrity will get paid after a certain sales milestone is reached after production and marketing costs are recouped. Clearly if JoJo has indeed sold 40 million ribbons she has very likely broken that milestone and is now earning a percent of profits. Using the industry average cost per goods sold on a $9 bow, we conservatively estimate that each sale generates $2.5 in net profit. Based on similar celebrity endorsement deals that we’ve seen, the celebrity would be lucky to get 20% of profits after costs are recouped. That’s $0.54 per sale, pre-tax. If JoJo did inded sell 40 million bow ribbons, let’s presume she had to sell 10 million for her partner to recoup costs, that would leave her with $16 million pre-tax. Call it $8 million after tax. Clearly not chump change if those sales number are correct. Also please keep in mind that any net worth number you see on our site is after taxes. So for someone to have a net worth of $12 million, they would have to earn $24-30 million before taxes and various other fees. Also to be clear, if JoJo maintains her current level of popularity we absolutely foresee a day where she is worth $50-100 million.

Real Estate: In February 2022 JoJo paid $3.5 million for a home in the LA suburb of Tarzana, California. 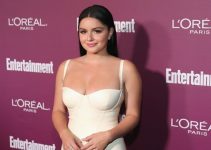